It is believed by a consensus of anthropologists that apes and humans diverged from one another roughly 7 million years ago. Hominins remained in Africa for another 5 million years, until they began to spread out across the world. This is what is known as the “Out of Africa” theory.

A new discovery is radically challenging this view. A study conducted on fossils found in Bulgaria and Greece has finally reached its conclusion. The verdict is that the specimens are hominin in nature. If the findings of the study are correct, then Graecopithecus Freybergi could now be the oldest hominin known to science – at 7.2 million years old. This surpasses Sahelanthropus Tchadensis found in Chad.

The specimens come from two separate finds: a lower jawbone from Greece, and an upper pre-molar tooth found in Bulgaria. The initial discovery of the Greek jawbone prompted that Graecopithecus was simply a hominid (the taxonomical family of humans and great apes – as opposed to the more specific sub-family homininae, and tribe hominini).

The jawbone specimen was discovered in 1944, when it was dug up during the German occupation of Greece. David Begun of the University of Toronto, who co-authored the study, now believes it was misidentified upon initial classification. The genus Graecopithecus was supposed to be the last of the great apes to live in Europe before climate change caused massive die offs. Now upon further examination, in tandem with the supplementary evidence of the Bulgarian tooth, Begun insists that the genus Graecopithecus and the species Freybergi are in fact hominins.

The oral features of the specimens are what have confirmed its identity as a hominin. As human ancestors moved out of their jungle habitat to savannahs, they evolved teeth with wider molars, thick enamel and less prominent canines. The specimens from Europe possess these features, therefore Graecopithecus may be part of the human evolutionary chain. Professor Madeline Böhme, leader of the study, has stated: “While great apes typically have two or three separate and diverging roots, the roots of Graecopithecus converge and are partially fused – a feature that is characteristic of modern humans, early humans and several pre-humans including Ardipithecus and Australopithecus.” 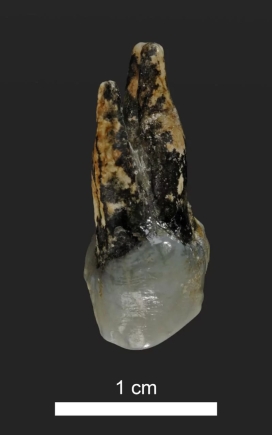 Skeptics remain wary of the find. Sergio Almencija, of Georgetown University, believes Graecopithecus may have evolved these oral features independently of human ancestors – an occurrence which is relatively common in primate evolution. He insists that more evidence must be provided in order to substantiate the claim of its human links. Tim White, of California Berkley, thinks the conclusions of the study are partly rooted in David Begun’s own confirmation bias – as he already believes human ancestry originated in Europe. Begun has rebutted this claim, indicating that the findings would not be met with such skepticism if the specimens were recovered in Africa.

The ramifications of these findings are massive. If true, then it could mean that the “Out of Africa” theory has to be re-examined. The findings induce a number of different scenarios in regards to the theory. The first scenario is that human ancestors originated in Europe and migrated out from there. The second is that perhaps migration went from Europe, developed in Africa, and then went out to the rest of the world. Third, populations could have left Africa, evolved in Europe, and then either migrated back to Africa or elsewhere. Or perhaps Sergio Almencijia is correct – that Graecopithecus Freybergi evolved independently of the human lineage.

Whatever the case may be, this discovery (like others before it) adds a whole new dimension to the origin of the human species. The constant discovery of new evidence and information in archaeology is inevitable, and our views will continue to be reshaped. The conclusion of this study does not mean that the human species originated in Europe, it just adds to the mystery by raising more questions than answers.