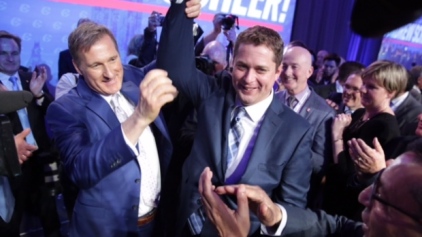 Underdog Andrew Scheer has won the leadership of the Conservative Party of Canada. In a shocking 13th ballot upset, Scheer secured a 51 to 49 percent victory over front-runner Maxime Bernier. Bernier finished first in every ballot leading up to the final vote, but never reached the required proportional threshold to take the race outright. Bernier was perceived to be the party’s leader going into the convention.

After a repudiation of Stephen Harper in the 2015 election, the Conservatives sought to re-unite and seek out a fresh new approach to their platform. Bernier seemed to be that candidate – as a libertarian with a liberal view on social issues, and a fiscally conservative approach to government size and spending. This would have been a relatively large turn from the previous Harper government’s pernicious and somewhat totalitarian views on security, privacy rights and surveillance; as well as its adherence to traditional social conservative values.

Instead, the party went with a socially conservative devout Roman Catholic, with a seemingly similar approach and tone to Harper. This seems like business as usual, and a repeat of the same mistakes which handed the Conservatives defeat to a Liberal Majority in the last election. Some have even dubbed Scheer: “Stephen Harper with a smile.” But Scheer is a young fresh face with not only strong conservative principles, but a less top-down approach than Harper. Despite his views, he has emphasized a pragmatic approach to several divisive social issues.

A big contemporary issue for the overall electability of a Conservative candidate in Canada pertains to social conservatism. Scheer, as a Catholic, is pro-life and personally is not an advocate of gay marriage. However, he has expressed amenability regarding these issues, and has promised not to impose his personal views on policy making. He does not believe in re-opening debate on gay marriage or abortion, or altering their entrenchment in Canadian law. Even if Scheer wanted to reverse these decisions, he would not be able to because of intense libertarian opposition within his own party.

He of course is fiscally conservative, and believes in the reduced role of government. He does however make an exception for Canadian supply management (price control of agriculture products). It was arguably his support from the farming industry which gave him the edge over Bernier (who wanted to scrap supply management all together).

Scheer’s choice as leader seems to be a comprise between the libertarian and socially conservative branches of the party. The question remains as to whether or not this pragmatic candidacy choice will be enough to take on Justin Trudeau in the 2019 Canadian federal election. Projecting strength and assertiveness will be important for Scheer. He will need to counter Trudeau’s vacuous ascetic appeal to uninformed voters, as well as bias from the liberal media. His candidacy seems a bit risky, given his similarities to Harper. But all things considered he has very strong views regarding non-interventionist fiscal policies – which many Canadians may find attractive after 4 years of deficient spending, debt accumulation and slow economic growth under the federal Liberals.

Some libertarians see this choice as a difficult pill to swallow. However, Scheer is highly intelligent, well-spoken and principled in many anti-bureaucratic approaches to the economy and society. His leadership will be well supported, and will likely challenge the likelihood of Trudeau securing another majority government in 2019.