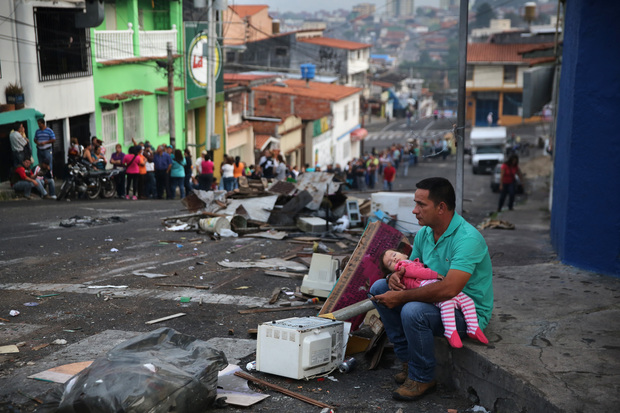 The socialist experiment in Venezuela has collapsed and continues to deteriorate. It was not long ago that the countries socialist climb was celebrated by many liberal/left wing westerners. Hugo Chavez was seen as a grand visionary who challenged the imperial might of the United States; and vowed to keep the nation’s oil and resources in order to empower its people. Instead, after a brief period of stability, the countries socialist economy has crumbled; the streets have descended into chaos, people do not have access to food, crime has sky-rocketed and the government has become tyrannical in its effort to maintain power. The false promise of utopia that was promised by the government has been exposed, and the horrors of economic collapse and mismanagement have been fully revealed.

Venezuela is an incredibly oil rich nation. The current crisis began when oil prices began to decline. While prices were high, the government had a pristine opportunity to create a surplus of wealth and a vibrant economy. However, instead of pushing policies to liberalize markets and create incentive for local businesses, they remained entrenched in their hardline socialist principles. The government idealized welfare and handouts from the profits made by state controlled petroleum corporations, and produced virtually no incentives for diverse markets to take root. Now, after squandering the chance to create future economic stability, there are massive shortages. The country has almost no food, water, medical supplies, electricity, and even toilet paper; and the currency is essentially worthless.

The highly inefficient socialist system in Venezuela is getting worse as time goes on. The rights of the peoples have been gradually given up in exchange for the promise of having all their needs taken care of. The people now lack both liberty and prosperity – and under Maduro, economic forecasting has become far worse. The countries model is not dissimilar to the litany of repressive socialist states which have existed in the 20th century. The ruling elites have enrichened themselves while offering soothsaying solutions to the economic needs of citizens – throwing band aide solutions at problems, and not properly investing or facilitating long term economic growth. Since the death of Chavez, the rate of those living in poverty has gone up from 48 percent to an astonishing 82 percent.

As the country has descended in economic despotism and turmoil, the government has only doubled down in its agenda. Despite losing support in the National Assembly and public opinion, Maduro and the socialists continue to maintain their grip on political power.

As a way of consolidating power, the government has strategically armed those loyal to them. After confiscating the guns of all citizens, Maduro’s government then proceeded to arm those loyal to the central government – highlighting an efficient way to corruptly maintain power and intimidation through a period of instability and mass unpopularity.

As the crisis has gotten worse, Maduro has come down hard on his opposition. Prior to this, the opposition had made significant gains. In December 2015, they earned a majority in the National Assembly, ending the consecutive 16 year reign of the Socialist Party. In attempting to deal with the economic turmoil brought on by low oil prices, he devalued the currency by printing money to pay for the countries suddenly exacerbated social programs; and artificially raised oil prices. This predictably did not improve the situation.

In September 2016, thousands of protesters took to the street to call for the removal of Maduro. Continued calls for the president’s ousting persisted into 2017. In response, the country’s Supreme Court (acting on behalf of the socialists) enacted a ruling which enabled the court to take over the legislative duties of the opposition majority in the assembly. This decision was met with threats of impending increased violence, so the Supreme Court immediately handed back power to the assembly after 2 days. Despite this, massive protests continued on.

Opposition crackdowns have manifested in violent confrontations between protestors and law enforcement. The police are adopting brutal tactics in response to the massive protests that are occurring. People are dying in the streets at the hands of the violence, yet the government continues its heinous approach. Internet censorship is being widely enacted, and television news stations are parroting the government sanctioned propaganda and misinformation – all to control and centralize the flow of information.

US sanctions have just been imposed because of the countries latest questionable election results. In a review of the voter rolls, it was found that only 3.7 million people in the country voted. Despite this, the government claims that 8.1 million people voted – quite the discrepancy in what was initially compiled. With the results of this election favouring Maduro, the mandate now allows him to re-write the country’s constitution and effectively nullify the presence of the countries body of elected representatives. The low turnout is highly suspect, and contradicts an opposition held mock vote which registered 7.5 million people. It is clear that a significant amount of chicanery has taken place here – justifying the US sanctions.

US intervention in the country is a real possibility. If that were to occur, then accusations of foreign imperial meddling would loom over the United States. Because of this, direct intervention would not be the best option to purse at the moment – especially since so much of the local population would adamantly detest perceived imperialist meddling by the historically jingoistic America. Accusations of meddling have been primed and pushed by Maduro. In May of 2016, in reference to the deteriorating situation in his country, he proclaimed that Washington was meddling and trying to install a right-wing fascistic government; and also said that necessary measures had to be taken to prevent such an occurrence – without providing details. It appears as though Maduro will conveniently accuse the US of wrong doing every time he is accused of corruption or threatened with the loss of his power.

One thing is for certain, the crisis in Venezuela is the product of a socialist experiment gone array. Many on the left dare not call Venezuela real socialism, instead labelling it as a dictatorship and blaming corporate greed and capitalism for the problems. Funnily enough, in years past when Venezuela was reported to be a glorious utopian paradise, the left was all too eager to cite it as a wonderful example of the triumphs and good will of socialism.

The moment Socialist systems inevitably collapses and austerity is imposed (like all socialistic and communistic regimes) things decent into chaos as the ruling powers double down in an effort to keep power and keep their ideological tyranny intact. Socialist governments do not give an inch to contradictions in their worldview for fears that they will lose their grip on the totality of their power. Free market will breed success, longevity and peace, and that in turn will lead to election results which will not favour the power hungry minds of statist socialist power brokers. In Venezuela (and other historically socialist states) the imposition of free market reforms and solutions would invariably provide a sane alternative to the reality of government controlled dependency and its unsustainability.

Venezuela is a recurring example of the failures of hardline socialist countries in the 20th century. As the system invariably descents into inefficiency and dissatisfaction, the ruling powers compel every means necessary in order to mask the failings of the abstract collectivist ideology. Imploring a diverse pluralistic system as a remedy would lead to free markets and private property rights – as civilians realize the latent problems with socialism and reject its reality  For this reason, socialist states through the last 100 years have seldom tolerated opposition, or opinions which differ from the uniform party line. Ultimately, it is a system which must mask its failings by brute force, intimidation and terror.

What is currently going on in Venezuela has characterized the systems predictable collapse. Socialist systems always double down and are always reluctant to give up power. It is no coincidence that socialist experiments around the world have led to tyranny at the highest level. Even social democracies have manifested into untenable Keynesian economic models through massive debt spending and economic stagnation – creating massive economic and societal problems brought about by dependency for the next generation to deal with.

Call it sociopathy, insanity, cognitive dissonance or addiction to power, this is a system which breeds corruption, the misallocation of resources, the mismanagement of market forces, the debilitation of supply side economics leading to mass shortages, massive debt spending and inflation. In turn, the collapse of a false utopia will transition into tyranny by the forces which use the coercive power of the socialized state to further their own power, interests and ideology – regardless of how many people need to be compromised or eliminated along the way.